The next generation of international talent

After Chloé’s post about Scotland I decided to write about other nice places
which are also worth a visit. Really close to Bath (less then 15 minutes by train) you can find Bristol. It’s quite a big city near the sea. I visited Bristol on the weekend when the Harbour festival was on. There were many people, programs, vendors on the streets and luckily the sun was shining, so it was perfect for walking around.

I got off the train at Temple Meads railway station, my way lead to St 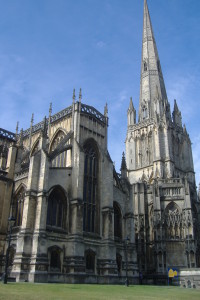 Mary Redcliffe Church, which looks fantastic from the outside, and I planned to visit it in the inside as well, but a wedding has just started, so I had to move on into the city.

I visited the Andolfini Gallery, which was named after the famous painting of Jan van Eyck, but it opens just at 11 a. m, so I decided to skip this attraction too. The gallery is in the part of the city called Harbourside. I crossed the Pero’s Bridge and walked along by the River Avon. It was around 10 a.m. but it was already a hive of activity.

I continued my route to the Cathedral, where I could finally go inside. My favorite part of this place was the garden, which was a small old cemetery as well. It was well-kept and has the cathedral as a beautiful background. Of course the inside of the building is amazing too.

I took some photos of the City Hall as well, with golden unicorns on its roof.

I read on the Internet that it’s worth walking down on Bread and Corn Streets,  because they are the oldest ones in the city, but I took the wrong turning, and realized I was in front of the buildings of the Bristol University and the Gallery.

I also visited the shopping quarter of Bristol which is called Broadmead. It looks the same as other shopping centers, so my only photo from here is of ‘Gromit’, the clay animation character. 80 sculptures of this dog were put out in the city during 10 weeks, and they’re going to be sold in a charity auction.

After my long, exhausting, but really nice day, the typical English weather arrived, and I got back to the railway station bit wet, but luckily I was prepared and brought my raincoat with me!

So that was my “short” report about Bristol. I really liked this city, there are a lot of things there I haven’t yet seen, so I think I’ll visit it at least once again during my stay.